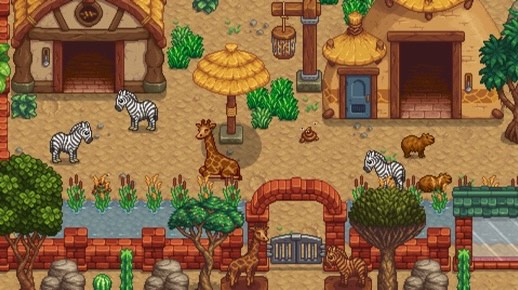 After receiving months of backlash online and facing alleged claims of stolen assets from the popular game Stardew Valley, the developers behind the upcoming and controversial game title Super Zoo Story speak out to tell their own story.

Ihor and Anna, a married couple from Ukraine, are the founding members and the only members on the Super Zoo Story development team.

“Growing up, our country was not very video game friendly,” says Ihor. “Anna didn’t grow up with video games. In the late ‘90s, not everyone could afford video games, let alone a console.” In the post-Soviet era, they were playing on a console called Dendy, an unofficial hardware clone of the third generation Famicom console from Nintendo. At the same time, people in the West were already experiencing the first iteration of PlayStation.

“Much of my life has revolved around soccer, one of my favorite games as a kid was Kunio-Kun Nekketsu Soccer League,  which we called Gol 3,” he added. “I also loved the game Ring King, I remember playing it with my friends on the black and white TV. We weren’t allowed to play it on the color TV because someone started a rumor that consoles ruin TVs. But at that time when we didn’t have anything, even on a black and white TV, it was amazing.”

Today, the pair are full time game developers who have confidently found their passion and plan to stick with it for many years to come. Super Zoo Story will be the duo’s first attempt at a released game, although it wasn’t without years of practice and let downs.

“Five years ago, we started by working on game ideas but never got anything done,” said Anna. “We spent most of our time learning how to draw, which was a new experience for the both of us. We eventually tried to make games for mobile devices in vector graphics software, but we didn’t have a programmer and never got any of those games finished.” Completely undeterred and with a strong do-it-yourself work ethic, the couple then set out to learn how to program their own games.

“At the beginning of this project, we were inspired by Stardew Valley. For us, it was the benchmark for quality pixel art and world development,” said Ihor. “Originally, our idea was a simulator of a beach trader, where players could sell products to various vacationers and grow their own products in a small garden. Oddly enough, we had watched the show Narcos around that time and were inspired by the zoo in the series. This had us thinking of expanding our game idea to that of Super Zoo Story.”

Like many creatives, Ihor and Anna posted to social platforms to advertise their progress. At first, people seemed to have enjoyed the game concept and welcomed the project. Due to the striking resemblance to Stardew Valley, the controversy began when rumor spread that they may be using stolen assets for their own game.

“In the early stages of drawing, we were strongly influenced by Stardew Valley’s style and that’s what unintentionally got us into this situation. We were limited by the size of the 16×16 graphics and as a result, some of the objects looked similar,” said Ihor. “We tried to emulate a similar style to Stardew Valley in the beginning, however, we didn’t think it would come across as a copying of assets as many games already draw comparisons to Stardew Valley and Harvest Moon. Ultimately, we should have started making changes to our graphics much earlier. Anna wanted to do so quite some time ago, but it was my fault for being stubborn.”

What they were unprepared for was the gaming community’s harsh reaction to the rumors. “We didn’t expect people to be so aggressive,” said Ihor. “It was overwhelming to receive such a vast amount of negativity. It was hard at first because Anna and I believed this video game genre and the community as a whole to be warm, loving, and open. We saw a completely different side. I was raised by my grandmother who is 92 years old. She persevered through a famine of 33 years, by a miracle survived the Second World War, and yet, still sees the world with so much optimism. I tried to adopt her mindset in this situation. We couldn’t give up, this was our dream. We had to address the issues, make changes for the better, and move forward.”

To dispel the rumors and in the spirit of transparency towards the gaming community, Ihor and Anna have started a YouTube channel to showcase how they draw their pixel art for Super Zoo Story from scratch.

The couple do not have a release date for Super Zoo Story. All we know at this time is that they are in the process of planning a Kickstarter. Looking towards the immediate future of their project, “We will do everything in our power to make an original game of quality and that we can’t wait for people to experience it all.”