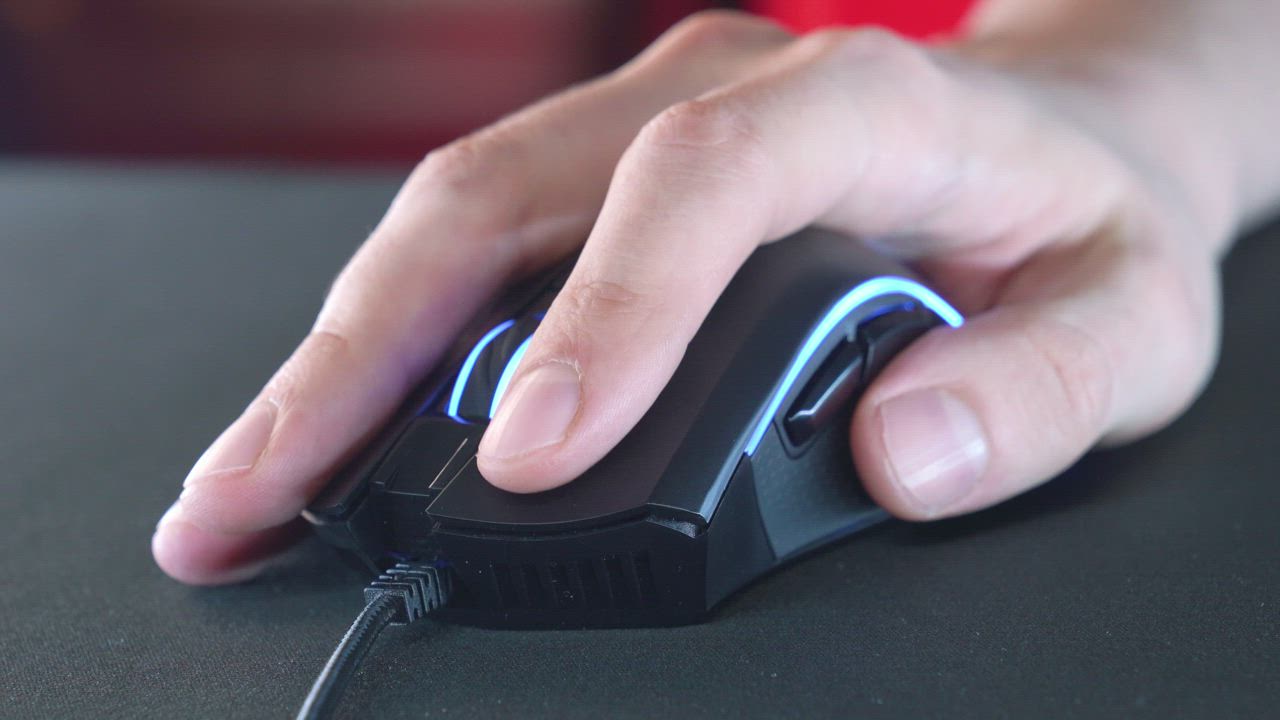 I have been a gamer since I was five years old. My parents bought my brothers and I an Atari 2600 for the Christmas of 1979. From that first time I sat crossed legged on the carpet in front of our old Magnavox wooden console television and played Space Invaders I’ve been hooked. I spent countless hours plugging and unplugging cartridges into that Atari. I would play until my joystick started to fall apart. I have no idea how many of those classic joystick controllers I went through, but it was a lot.

Over the years I would spend hours at the local arcade and owned almost every gaming console that came along. I was in my early forties before I finally took the plunge into PC gaming. Getting used to keyboard and mouse after being a controller only gamer for many years was tough. I stuck with it though, and now I only use a controller on rare occasions.

My early forties were also when I started experiencing pain just above my wrists and occasional numbness in the thumb of my right hand. This would happen sometimes when I would sit down initially to play, and at other times after I’d been playing for several hours. I of course was aware of carpal tunnel syndrome, tendonitis, and the host of other injuries that could be caused by repetitive motion. The research behind how prolonged gaming could be the cause of these type of injuries was just emerging. So, I checked out some videos on YouTube and found some other resource material on the subject. I was able to find some hand and wrist stretches, and exercises that did give me some relief.

I also found research that said carpal tunnel could also be caused by having your wrists bent during sleep or resting your wrists on the edge of your desk. My wife bought me some night wrist splints to keep my wrists straight while I slept which also helped.  Of course, like most guys tend to do when it comes to health. Instead of sticking with the splints and the stretches I stopped when I started feeling better.

Eventually, the pain and numbness returned and were much worse. The pain didn’t happen only while I was gaming now, and the thumb on my right hand soon lost all feeling. Additionally, the numbness would sometimes travel to my index and middle finger on my right hand as well. This didn’t just make gaming difficult, it made doing everything more difficult. I had pain while brushing my teeth. My thumb and fingers would go to sleep when I tried to write with a pen. It was affecting my entire life.

My wife and I decided it was time for me to see a doctor. I was officially diagnosed with carpal tunnel and severe nerve damage in my right wrist after having a nerve test performed by a pain specialist. Trust me, a nerve test is no fun. Basically, the doctor put these loop type electrodes on the tips of my fingers. Then inserted small needles with wires attached to them into the nerves at certain points in my hand. The memory of that part still makes me cringe. Another device was pressed against on my inner forearm that administered electric shocks down into my wrist and hand. What this does is measure how long it takes those nerves to carry information back and forth. From those readings it can be determined if you have nerve damage, in what spots, and to what extent.

After receiving the news that I definitely had both carpal tunnel along with severe nerve damage I asked the doctor what I needed to do to get better. Did I need to go back to wearing the night wrist splints? Get wrist rests for my mouse and keyboard? Cut back or stop gaming completely? The idea of not being able play games anymore was soul crushing. The doctor informed me that I was well past any of those preventative measures and would need surgery. If I did not have surgery, I would eventually lose all strength and feeling in my hand.

I was referred to a hand surgeon that specialized in a procedure called carpal tunnel decompression. In the days leading up to my consultation appointment with the hand surgeon my mind went wild with questions. Am I going to have my wrist cut open? How long until I can use my hand after surgery? Will it really help, or just make things worse? Will I be able to play games again, or do anything like I was able to before carpal tunnel?

Like most people I turned to the internet for answers. I learned that carpal tunnel decompression was when incisions are made into the carpal tunnel in your wrist to widen it, and to take the pressure off the median nerve and give the nerve more room. Other than that, I really didn’t find a lot of helpful information.

The day of my consultation finally came, and the surgeon was awesome. He answered my questions and alleviated my fears. He explained that in addition to the inflammation of the median nerve caused by years of repetitive motion. The way I was resting my right wrist on the edge of my desk when I used my mouse had compressed the nerve even more. He was going to perform the surgery endoscopically so that meant only a tiny incision and very quick recovery time. From start to finish the entire procedure would take about fifteen minutes. He thought that after surgery the median nerve would heal over time, and I would regain full normal hand function. He also said that I wouldn’t have to stop using the hand and playing games after surgery at all! He said there really isn’t a way to “mess up” anything. That in fact it was better to move the fingers, thumb, and wrist so that scar tissue wouldn’t develop and compress the nerve again. Was all this too good to be true? Was he just selling me a bill of goods? I chose to be positive and accept what the hand surgeon had told me at face value.

I arrived a month later at the outpatient surgical center for my procedure at 7 AM on a Thursday. Due to COVID restrictions my wife couldn’t go in with me. The surgeon, and anesthesiologist talked with me briefly before I was to be wheeled to the operating room. They both really made me feel comfortable an at ease. Once in the operating room my right arm was placed onto a surface down and out of my field of vision. I remember feeling my hand and wrist being clamped into place. The anesthesiologist spoke to me briefly and then I was out.

I was awakened by a nurse calling my name after what felt like only five minutes. I immediately noticed my arm was back at my side, so I lifted it to have a look. My hand and wrist were heavily wrapped in an ace bandage over gauze. After spending a few minutes in recovery, I was able to dress and walk outside so my wife could drive us home. 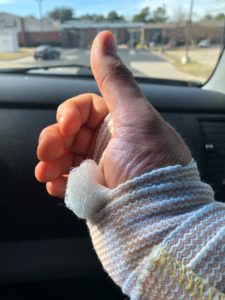 My wrist right after surgery

The whole thing had been a breeze! Pain after surgery was only moderate, and I only needed the prescribed painkillers for the first day. I gave it about three days and sat down at my desk to play a game. WITH a gel wrist pad for both mouse and keyboard now.  I only had minor discomfort which over the following days went way entirely. I noticed that in the months that followed that the feeling in my thumb returned. As the now decompressed nerve began to heal further, I noticed I was playing better and that my reaction times seemed to be getting back to where they had been before carpal tunnel. 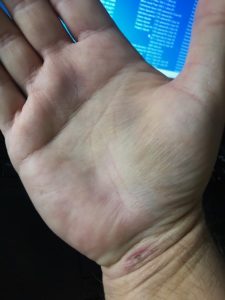 Two months after my surgery

As I write this it has been nine months since my surgery. I’m happy to report that my hand and wrist are still doing great.

I urge you, if you are experiencing pain and other symptoms in your hands and wrists go see a doctor. You may not need surgery like me. You may be able to do other things to relieve the symptoms. If you do need surgery don’t let fear overtake you. It doesn’t mean that your gaming days are over.