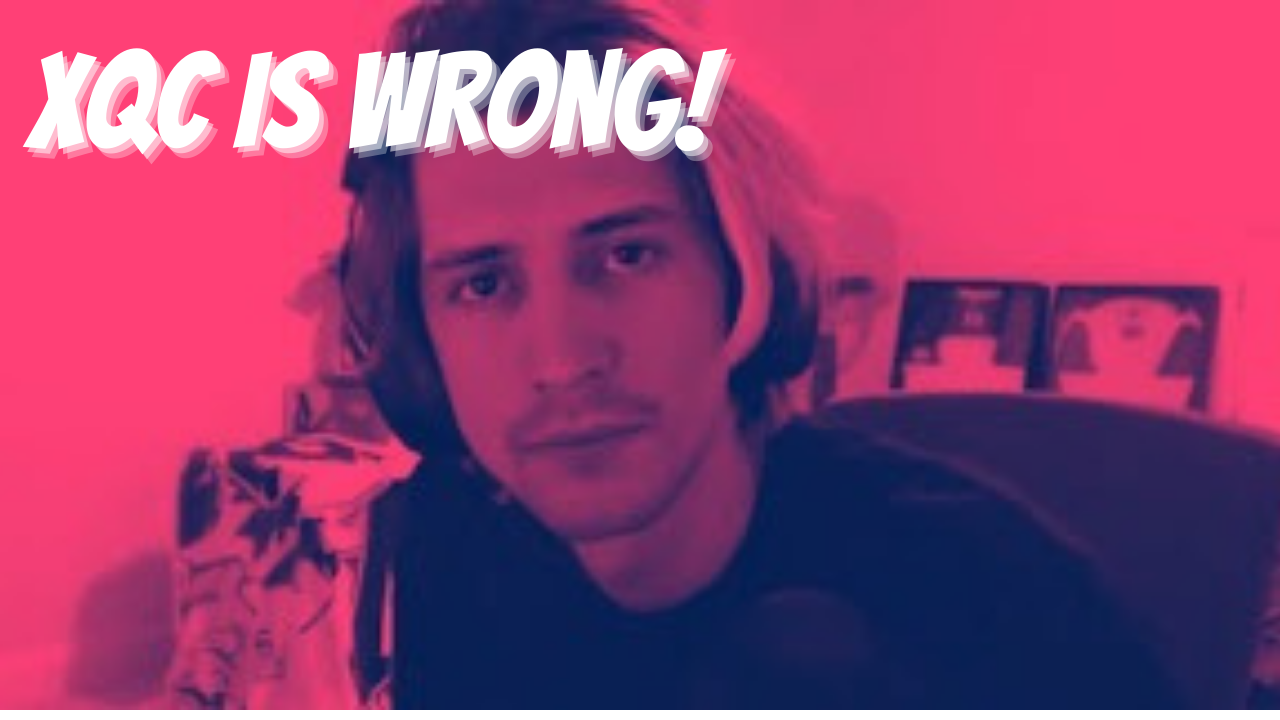 xQc is Wrong and Why there is no Twitch vs. YouTube

If you search for streaming advice, and or opinions on stream news or platforms you will find there is no shortage of opinions out there. With many opinions and or advice it is easy for someone to believe anything they hear from a number of sources especially if they are as prominent as xQc.

Recently Ludwig made huge waves by leaving Twitch for YouTube. Ludwig was the 6th ranked streamer on Twitch and became the most subscribed Twitch Streamer after a very lengthy subathon. So many had weighted in on their opinions and one such opinion was from xQc. A once amazing Overwatch pro and streamer xQc has the most total hours watched on Twitch. Known for giving his opinions xQc weighted in on the “YouTube vs Twitch” conversation that a lot of people are having.

His opinion was that if  YouTube wanted to over take Twitch then they would need to spend a billion dollars and sign OfflineTV or OTK to beat Twitch in this streaming war. I completely disagree with him. See I feel like xQc for as successful he has been and many other streamers like him doesn’t actually mean that they are always right. In fact I have coined a phrase for this type of mentality and I call it the streamer brain. Streamer brain is when you get stuck in the rat wheel that is just Twitch streaming. Where you believe  live streaming is the only  viable content, and that Twitch is untouchable.

That is where I would say your wrong, in fact I would tell xQc he was wrong as well. My bias aside cause I do make content on YouTube lets just talk about the facts on these two platforms. One thing I want to point out is a large majority of people will talk about YouTube low streaming numbers, When in all actuality that is cause they are using streamer brain, Cause the reason streamers don’t stream as much on YouTube is a large majority of them are making other content and (this is a big one) once a YouTube stream is done the VOD will still receive traffic especially if that stream is highly searched. So there is really no reason to sit there and try to stream every single day to get as many views as possible cause you don’t have to.

So lets take me for instance I left Twitch and now I am on YouTube I stream maybe 10 hours a week and create other type of content. I am just a small channel of 233 subscribers and have maybe two or 3 videos that have broken 1k, and even though I am not able to monetize right now I made $27 dollars in ad revenue my little channel did that. On Twitch I would stream anywhere from 12 to 30 hours a week I never broke 3 dollars. Now think of it this way what if I was a bigger streamer or content creator and my channels are getting large amount of views and hours watched even when they are offline. You eliminate the need to always stream and frees you up to make better content.

YouTube has over 2 billion monthly active users, 30 million paid subscribers, and 42.9% of the online global population are YouTube monthly active users. YouTube is owned by Google, Google is the number one search engine in the world, with YouTube being second next to its parent company. The total hours of video watched on YouTube each month is 3.25 billion. We will use this years stats on Twitch cause they are its best yet. This year twitch had 2.84 million concurrent viewers. Twitch has over 9 million active channels. Twitch hours watched last year 18.6 billion hours. (2021 hasn’t come out yet it will be higher). Twitch revenue in 2020 was $ 2.3 billion dollars. YouTube generated $19.7 billion in revenue.

So as you can see YouTube dwarfs Twitch by a very large amount. So does YouTube really need to compete with Twitch? No it really doesn’t in fact YouTube is better not being known for just Live streaming. The fact that YouTube VOD content produces a much better atmosphere for advertising and they are clearly as a company far bigger then Twitch there is really no vs. YouTube gathering up large streamers not just so they can stream on their platform there is a lot more value then that, and the fact that most streamers can’t and wont understand that is why they will constantly compare the two. When the reason why streamers are being paid more and get to have better lives on YouTube there is really no comparison between the two.

That leads me to next and final point. When someone compares the live streaming hours of platforms like Twitch to YouTube, they aren’t looking at the big picture, if you want to compare the two you need to compare them as a platform and as a business. It is easy to say Twitch and FB Gaming has all these live streaming hours over YouTube because the live content on YouTube is more meaningful and has more purpose. Live streaming on YouTube is meant to be a form of content to engage with your audience that usually is watching your uploaded videos.

So to xQc and to all the other big streamers that have only streamer brains, I say to you I think your wrong. I don’t think YouTube is going up against Twitch at all, in fact I think YouTube may one day be the go to platform for most content creation, bold claim? Remember when Blockbuster only rented videos and DVD from its stores and refused to change its business to stay relevant because they were the richest and most successful business? Then came Netflix first with the rentals mailed to your house. Then they made it so you could stream the movies at home, and people stopped going to Blockbuster. Now the last Blockbuster is a novelty store and its all but dead as a company. Twitch only does one thing and that is live streaming, and they do it to a much smaller audience then YouTube has. YouTube has uploaded video content, live streaming, shorts, and a plan to make live streaming better on their platform. Why would I want to go to Twitch just for some emotes and a badge? What happens when YouTube starts having the same functionality and you have several different ways to consume your content instead of just live streaming? Only time will tale. My money is on YouTube’s far as playing tank on Overwatch I would never question xQc, but on this subject it just shows that even the big streamers don’t actually look at the big picture they just see what makes them feel comfortable.