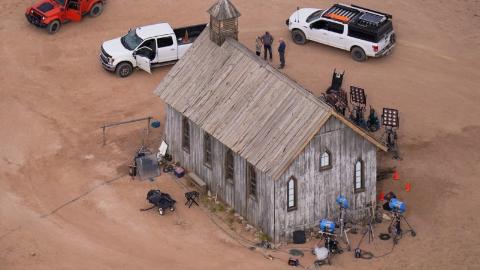 The authorities are currently doing an investigation in the death of the cinematographer Halyna Hutchins on the set of “Rust” in Santa Fe County.

Alec Baldwin was filming a low budget, $7 million film in October, and the gun being used as a prop by the actor Alec Baldwin went off on the set of “Rust,” a Western being filmed in New Mexico, killing the film’s cinematographer and wounding its director.

Santa Fe Police Department said they are in possession of the “lead projectile” fired from the gun used by actor Alec Baldwin when he shot and killed a cinematographer on the set of his new film, Rust.

Authorities are investigating to determine how a live round got into the gun that Mr. Baldwin was practicing with, why the crew members who inspected it on set failed to notice, and why the gun fired.

Additionally, Halls admitted to police not long after the shooting that he did not properly check the 1880s-era gun before declaring it a “cold gun” and handing it over to Baldwin for the rehearsal that went so horribly wrong.

Svetnoy previously confirmed he was standing next to Hutchins when she was shot and held her as she died on the New Mexico movie set.

As of now, Nobody has been charged in the set shooting, that killed Halyna Hutchins. The authorities so far have not placed any blame on anyone. 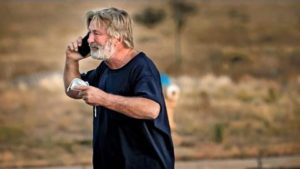 Alec Baldwin had remained silent throughout the investigation process after the fatal shooting.

He officially spoke out in a televised interview just this last Thursday night on ABC News. Alec Baldwin answered questions about the Oct. 21 shooting on the set of his Western film “Rust” where he fatally shot cinematographer Halyna Hutchins and injured director Joel Souza.

“I sat on that bench, and I said, ‘This movie has made me love making movies again,’”

“I really thought we were onto something,” he continued. “And then this gun goes off.”

“Someone put a live bullet in a gun, a bullet that wasn’t even supposed to be on the property,” Baldwin said. “Someone is ​responsible for what happened, and I can’t say who that is, but I know it’s not me.”

Alec Baldwin said “I don’t know what happened on that set. I don’t know how that bullet arrived in that gun. I don’t know,” Baldwin said. “But I’m all for doing anything that will take us to a place where this is less likely to happen again.”

“I loved working with this woman,” he said. “She was a joy. Everyone loved her as a person. And everyone admired her talent.”

Baldwin mentioned that on the day of the shooting, he and Hutchins met to discuss an upcoming scene. In it, Baldwin was playing a cornered and badly wounded character who would draw his weapon on two foes.

During rehearsal, Baldwin said the film’s first assistant director, Dave Halls, handed him a revolver. Baldwin recalled Halls telling him, “This is a cold gun” – industry jargon for a weapon that is either literally empty or loaded with non-firing “dummy” rounds.

“Now, what happened there, and why he made that statement, and what the realities were, I have, again, I have no idea,” Baldwin said.

To get the shot, Baldwin said he needed to cock the gun, but not fire it: “The trigger wasn’t pulled.

Gun in hand, Baldwin said he and Hutchins began blocking out the scene. She was directing his every move, he said: “Everything is at her direction.”

“This was a marking rehearsal,” Baldwin said. “And [Hutchins] says to me, ‘Hold the gun lower. Go to your right. Okay, right there. All right, do that. Now show it a little bit lower.’ And she’s getting me to position the gun.”

“She’s guiding me through how she wants me to hold the gun for this angle,” he said. “I’m holding the gun where she told me to hold it, which ended up being aimed right below her armpit.”

Torraco also would not confirm if Halls was the person who handed Baldwin the gun.

Next week, a two-hour “20/20” delves into the events ahead of the deadly shooting on the set of “Rust” and the pending investigations into what went wrong, and features the Baldwin interview and new interviews. “20/20” airs Friday, Dec. 10 (9:01–11:00 p.m. EST), on ABC and streaming next day on Hulu.

Rust gaffer Serge Svetnoy, and a second individual which will be likely many more lawsuits over the fatal shooting of cinematographer Halyna Hutchinson the New Mexico set of the indie Western was filed by script supervisor Mamie Mitchell.

“Alec Baldwin intentionally, without just cause or excuse, cocked and fired the loaded gun even though the upcoming scene to be filmed did not call for the cocking and firing of the firearm,” reads Mitchell’s complaint on claims of assault, intentional infliction of emotional distress “Mr. Baldwin chose to play Russian Roulette with a loaded gun without checking it and without having the armorer do so.” Mitchell is represented by Gloria Allred, was the one who made the frantic 911 call to Santa Fe police seeking assistance for the mortally wounded Hutchins after the shooting. Mitchell told 911 operators, “We need help immediately.” Allred said at the end of October that Mitchell “was standing very close to Halyna Hutchins and the director, Joel Souza, when both Halyna and Joel were shot.”

To keep up to date with the Alec Baldwin Rust Shooting, follow Gamactica Portals.