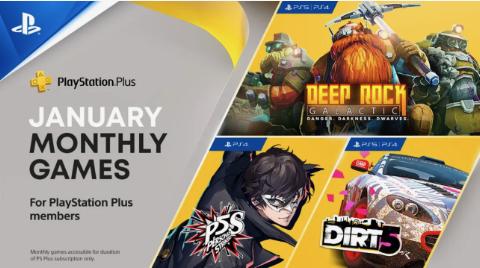 Every month PlayStation Plus members get to enjoy the benefit of receiving free games from Playstation.

Per PlayStation’s blog, PlayStation wants to start the New Year’s celebrations off early with the announcement of the trio of PlayStation Plus games you’ll be able to enjoy on Tuesday, January 4. Available to add to your game library until Tuesday, February 1 are Persona 5 Strikers, Dirt 5, and Deep Rock Galactic.

Remember: you’ve until the end of Monday, January 3 to add not only Godfall: Challenger Edition, Lego DC Super-Villains, and Mortal Shell to your game library, but also the three bonus PS VR games. The Persistence, The Walking Dead: Saints & Sinners – Standard Edition and Until You Fall.

Want to stay up to date with PlayStation Plus monthly free game releases? Follow Gamactica Portals.