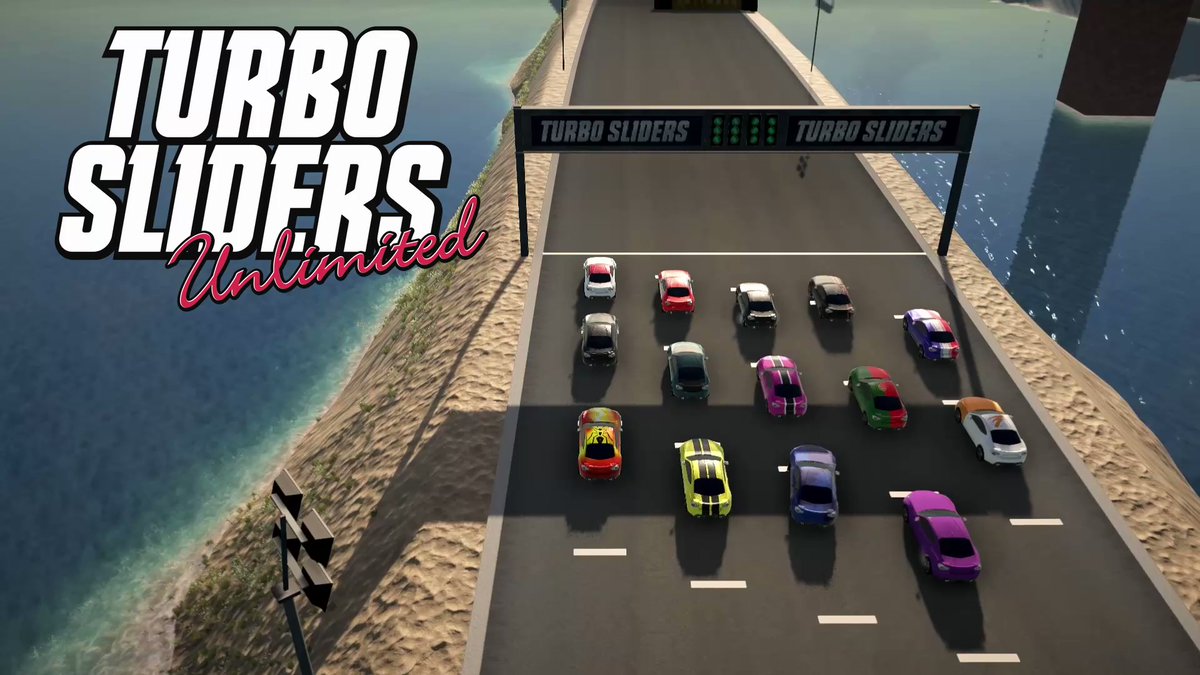 Turbo Sliders Unlimted, early access releases today April 27th for $14.99 available on Steam. There will be different types of customization packs that will be available for $1.99 (or a bundle of 4 with the price of 3). Different for different regions as usual, possibly with some launch discount. There is a possibility that the game will be released on other consoles as well in the future.

I was able to have an interview with Antti Mannisto who has developed 10-20 games, about the development of Turbo Sliders Unlimited. I was interested in knowing the specific types of marketing that are going to be used for the development of their games. He plans on using Twitter, Facebook, and social media.

It was promising and fun enough that he kept making various other tech prototypes. Made prototypes about things like paint jobs, in-game editor road building, and in-game vehicle editor. At some point, he realized he had gone too far to stop anymore. The game deserved to exist and had to be finished.

Because of its open design and community-driven approach, the future of Turbo Sliders Unlimited will ultimately be decided by its players.

I was able to test Turbo Sliders Unlimited with Game Developer Antti Mannisto and with individuals from one of Gamactica’s Beta Test teams. We were able to determine that the Graphics are smooth, beautiful to look at, and amazing, loved the gameplay modes and the lighting. Gameplay could do with having a brake button that you can press whilst still accelerating. You are able to use a controller while playing or use the arrow keys on your keyboard. This game will be fun to play with friends, and there are endless possibilities for role-playing. You are able to watch our gameplay here.

The old Turbo Sliders development lasted for over 10 years and the new incarnation is built to last, too. The main motivation to develop the game is that it is both fun to make and play. As long as that holds true, it doesn’t matter how many players might buy the game – the development will continue as there is complete freedom with no financial obligations.

Right now, Antti Mannisto is eagerly waiting to see what the future brings. All we know is that there are going to be lots of exciting races, fierce battles, and mayhem – and the best mods are most probably still to be found!

Antti Mannisto has not developed any games that he has worked on that he decided it was something that he did not want to release. He will work on the games to help fix them and make them better once released. He wanted to build something slow with nostalgia, that other player would want to play together.

A favorite aspect of designing and developing games is doing it differently, with nobody else telling you what to do. “you get to focus on what you feel is more interesting and fun to do without arguing with anyone” He works on coding and designing himself without a real designer. The only downfall is that there are a lot of features in the game, and individuals learn their own options while playing.

The most challenging and difficult about the development of games was the fact they were different and had to learn to program. There are many projects and different issues in every game. “you find a solution yourself, and maintain someone else source code(s) that’s provided and fix it to work properly whenever it doesn’t” Communication and ideas, and keeping the game real and not develop things that are impossible. Creating the roads and your own levels with easy routes which nobody has used before, small themes, and hard to find others to build is challenging, technical, and rewarding.

The development engine software that he has been using is RedLynx and Remedy had their own inhouse engines, Ubisoft also had Snowdrop, and Unity Visual Studio. Steam online libraries. The different programming software he has used is DSL and Emacs.

Antti Mannisto is involved in developing other Bigger projects after the release of Turbo Sliders Unlimited. Also, will be working on new game modes for the currently released games.

Make sure you go and check out Turbo Unlimited’s Profile and connect with them on Gamactica!