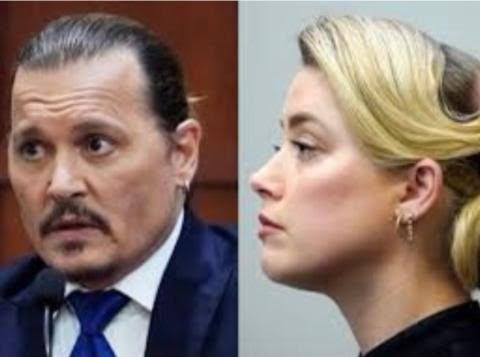 Earlier it was announced per Court TV, in Fair Fax, Va.(AP), a jury on Wednesday ruled in favor of Johnny Depp in his libel lawsuit against ex-wife Amber Heard, vindicating his stance that Heard fabricated claims that she was abused by Depp before and during their brief marriage. Their marriage ended up being a public spectacle and a vicious cycle of domestic abuse. Individuals feel that “Heard claiming she was a victim will prevent and make it harder for other real survivors from coming forward in the future.”

Johnny Depp and Amber Heard, once married and have been feuding since they divorced in 2016, and now the drama has been played out in the courts in the U.S. and overseas in London.

Depp received a jury verdict of $15 million instead of the $50 million, where he sued Heard in damages over a 2018 essay published in The Washington Post, where she said she had become a “public figure representing domestic abuse.” Heard, counter-sued Depp for $100 million, and the jury awarded $2 million in compensatory damages but received $0 in punitive damages.

“The jury also found in favor of Heard, who said she was defamed by Depp’s lawyer when he called her abuse allegations a hoax.”

The verdict will bring an end to a televised trial in which Depp, in hopes that he would regain his reputation and help give a voice to victims of domestic abuse in relationships.

Depp had fans that were on his side that were lined up overnight to grab a seat in the courtroom. One individual is known to pay $30,000 for their travel expenses just to attend the trial. Individuals who couldn’t get lined up outside, were on the street, chanting and cheering for Depp and there were fewer chants for Heard whenever she appeared.

Depp has already lost a similar libel case that was in London, where he sued The Sun for him a “wife-beater.” A judge there found that the newspaper had proved the article was substantially true.

Depp’s trial in the U.S., however, was entirely the opposite. A jury ended up deciding the case, and not the judge. Depp’s appeal amongst his fans, could of as well helped played a factor in his victory.

“He knows that he has a large fanbase,” said Wagmeister, “even throughout this entire legal battle, so Johnny Depp could also feel empowered by knowing that he does still have a fanbase behind him.”

“Depp and Heard were in Virginia Fairfax County Courthouse, where Depp was suing Heard for defamation. Depp claimed that Heard damaged his reputation whenever she wrote about domestic abuse in an op-ed that appeared in The Washington Post in December 2018. Depp wasn’t actually named in the article, he claimed in his lawsuit that the article implied he abused her and, as a result, he has lost movie roles and faced public scorn.”

“Depp’s case is unusual for another reason. According to Freeman, “Johnny Depp sued Amber Heard in this case but not The Washington Post. Generally speaking, in nine out of 10 cases, in a libel case you sue the media that publish as well as the person who is making the accusation. Yet he never sued The Washington Post in this case, which leads to the conclusion that this is really, in the end, a marital fight that has now grown into the American court system.”

Individuals who did not get to watch the trial can read more about it here.

Johnny Depp released a statement after his victory: