Recently, we reported that YouTuber Felix Kjellberg is known as ‘PewDiePie’ was facing backlash over the most recent video he uploaded on July 26th, that is titled “My Dog Cringes at TikToks.’ The video, clearly showed him mocking popular deaf TikToker Scarlet May.

PewDiePie was seen making fun of Scarlet’s hand movements by using his pug, Maya to recreate her sign language. After the backlash he received, he posted an apology to her in the comments section of the video he uploaded and pinned it for everyone to see. 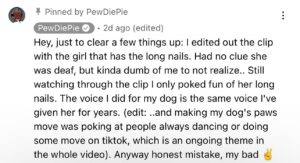 Scarlet May, responded to the video and wasn’t really enthused by his apology and she “denies trying to cancel PewDiePie” despite the drama that he may have caused. Check out Scarlet May’s response here.

She has been normalizing using Sign Language using long nails, and mentioned that PewDiePie’s comments that he made directed towards her were “weird”

“Apparently there’s this big YouTuber, PewDie-whatever, I don’t know his name. But he made a reaction video to one of my TikToks making fun of my nails, making fun of my signs with his dog, and I guess at one point mocking my voice,” she began.

“How do I feel? I feel like it was very weird and very unnecessary, but at the same time, I wasn’t surprised. I’m used to it.”

“I’ve been trying to normalize and put it out that using nails while signing is normal, like, it’s okay. But then a big creator comes on here and puts us a million steps back, so it’s very frustrating.”