Partnered Twitch streamer, SweetTails was streaming live on TikTok and Twitch on August 8th playing The Mortuary Assistant. She surpassed her previous Twitch viewers amount, amassing 8,302 and the Vod totaled 101,854.

Individuals started a Sub Raid, while other streamers were raiding her stream. SweetTails, was amazed how one viewer kept gifting subs.

Someone started a Hype Train whilst she was trying to end her stream to convince her to do a 24hr stream, you can check it out here. 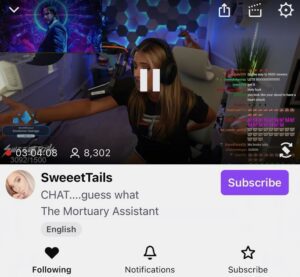 SweetTails asked her viewers if they were watching her from Twitch or Tik Tok, most of her viewers came from Tik Tok to Twitch to watch her live stream.

Viewers kept gifting so many subs during the gifted sub raid, that it caused her streaming platform to freeze and notifications kept going off while attempting to play The Mortuary Assistant, ultimately causing her computer to freeze. She mentioned she couldn’t even update her sub-count goal.

Whenever SweetTails realized she passed her previous viewer amount, she wanted a screenshot of the current viewer’s count, I as well made sure I got one.

After completing her stream for the day, she was so excited that she really did not want to end her stream and kept leaving and coming back. She told everyone she was going to cry after her stream ended.

She ultimately decided to end her stream without raiding another channel and asked her viewers to come back to her next stream.

SweetTails continued to receive donations after her stream ended and viewers refused to leave her stream stating they would stay all night.