Here is all of merch unboxed! Thank you @RockstarGames for the awesome care package ✨🙏🤠 pic.twitter.com/aofUDRwzS7

Google stated last September, it was shutting down Stadia due to it “not gaining traction with users”

Rockstar sent Colour, who had 6,000 hours of gameplay on the game Red Dead Redemption 2 on Stadia a going goodbye present.

He shared with all of his followers on Twitter the amazing items that were gifted to him after he unboxed them all and thanked Rockstar. 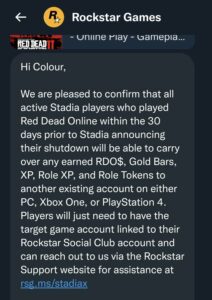 Also, he stated that he wanted to thank Rockstar again for reaching out to him and helping the Stadia community save most of their RDO progress from being lost.

Rockstar confirmed that all active Stadia Players who played Red Dead Online within 30 days of Stadia announcing their shutdown will be able to carry over any earned RDO$, Gold Bars, XP, AND Role Tokens to another existing account on either PC, XBOX One, or PlayStation 4. Players will just need to have the target game account linked to their Rockstar Social Club account and can reach out to them via the Rockstar Support website.